Welcome to Daniel Levy, who joins the lab as a PhD student!

Congrats to Divya, who moves on to a Scientist position at RoosterBio where she'll be leading an EV production effort.

Divya becomes the second PhD student from the lab to successfully defend her thesis, congrats!

Thanks to RoosterBio for supporting our work on MSC EVs!

May 2019 - Dr. Jay promoted to Associate Professor with tenure

Appointment effective July 1, 2019. Thanks to all the family members, lab members, colleagues, and mentors along the way for making this possible.

Congrats to PhD student Divya Patel who was awarded 3rd place in the Dean's Doctoral Research Competition after winning the sole nomination from the Fischell Department of Bioengineering!

Congrats to PhD student Anjana Jeyaram who was one of 3 University-wide finalists for the Graduate Student Distinguished Service Award!

Congrats to senior undergraduate researchers Cristina Tous and Christopher Kuffner who both will be matriculating at Boston University in the Fall to pursue PhDs in Biomedical Engineering!

Congrats to John, Madeleine, Jinan, Eli and Sonya on the acceptance of their paper "HER3-Targeted Affibodies with Optimized Formats Reduce Ovarian Cancer Progression in a Mouse Xenograft Model" in AAPS Journal!

Well deserved recognition for these fantastic students! Thanks also to graduate student Eli Pottash for providing outstanding mentorship to both.

Congrats to PIs Dr. Ian White and Don Devoe of UMD on their new R01 from the National Institute of General Medical Sciences (NIGMS)! We are excited to collaborate on this project to enable extracellular vesicle-based biomarker development via digitized single vesicle analysis.

Congrats to Eli on being selected for a fellowship position on UMD's Host-Pathogen Interactions training grant from the National Institutes of Health! This award via the National Institute of Allergy and Infectious Diseases (NIAID) will support Eli's work on developing new biomimetic and bioinspired nucleic acid delivery systems.

Congrats to Divya for her new paper in Acta Biomaterialia, published as part of a special issue on Cell and Tissue Biofabrication!

Congrats to Tek and Divya for their new papers in Methods in Molecular Biology and Biotechnology Advances, respectively.
Congrats also to our collaborators Dr. Wei Chao and Dr. William Bentley.

With the Bentley group: Genetically Engineered Bacteria as Vehicles for Localized Delivery of Therapeutics: An Application for Crohn’s Disease

Congrats to Anjana Jeyaram for being selected for a 2018 BMES Career Development Award, which provides a complimentary registration to the 2018 BMES Annual Meeting and a travel stipend! Anjana will be presenting her work on enhancing the therapeutic efficacy of extracellular vesicles via co-loading of miRNA cargo.

Congrats to Divya Patel for being selected for a podium presentation and winning a Student Travel Award to the BMES Annual Meeting in Atlanta in October!

Welcome to Louis Born, a MD/PhD student starting his PhD phase in the lab this summer with a prestigious A. James Clark Doctoral Fellowship!

Congrats to Anjana Jeyaram for winning the judges' award for Best Poster at the 2018 World Preclinical Congress!

Dr. John Schardt leaves for his postdoc with Dr. Peter Tessier at the University of Michigan. He will be missed!

Congrats to Dr. John Schardt for placing 2nd in the Clark School Dean's Doctoral Research Award Competition. John was the sole nominee from Bioengineering and received a $1000 prize for his efforts. Great job!

May 2018 - Congrats to senior Capstone students! 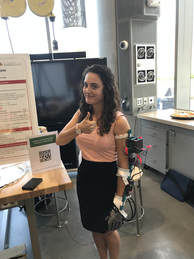 This award will enable Madeleine to continue her protein therapeutics work in the lab. Congrats!

Thanks to all of the graduate students in the lab for the nomination.

Congrats to Sonya Williams and Natalie Livingston for their successful defenses of their BIOE Honors Theses!

John becomes the first PhD recipient from the lab, and all he had to do was design, express, purify, and test ~25 different proteins. Congrats!

Thanks to the CDMRP Peer-Reviewed Medical Research Program for the recognition of our efforts to develop EV-based treatments for diabetic wounds.

Congrats to Natalie and Eli! UMD News Article
Congrats also to Natalie who has decided to pursue a PhD in Biomedical Engineering at Johns Hopkins University!

We're excited for our new space in Rm 3113 of the recently opened A. James Clark Hall!

Thanks to the NHLBI for supporting our work on controlled RNA delivery via EVs. UMD News Article

Thanks to the NSF for supporting our work on therapeutic EV biomanufacturing. UMD News Article

Thanks to the Rivkin Center for supporting our work on HER3-targeted therapeutics for ovarian cancer treatment.

Congrats to Sonya for winning this award to support her BIOE Honors thesis research!

Congrats to Jinan for winning 1 of 2 awards from Mtech recognizing her outstanding research contributions!

This award will enable Sonya to continue her protein therapeutics work in the lab until graduation this May. Congrats!

Early-career translational scientists are annually selected to serve for a period of 1 year to act as advisors for the journal and select and summarize research papers to be highlighted in the Editors' Choice section.

Congrats to Tek and Anjana for their new papers in Scientific Reports and AAPS Journal, respectively.
Congrats also to our collaborators Dr. Zhengguo Xiao and Dr. Catherine Fenselau!

Congrats to Tek on his new job! Tek's contributions to the lab over 3+ years have been tremendous and he will be missed, but we wish him well in his new position.

Congrats to Team MATRIX on receiving an Arthritis Foundation grant from the Alpha Omicron Pi Foundation to support their work studying potential therapeutic applications of EVs in osteoarthritis!

Divya's paper, entitled "Impact of Cell Culture Parameters on Production and Vascularization Bioactivity of Mesenchymal Stem Cell-Derived Extracellular Vesicles" was accepted in BioTM! This work, which was co-authored by Kelsey Gray and performed in collaboration with the laboratory of Kimberly Stroka at UMD, shows that cell passage and density impact the therapeutic and translational potential of MSC EVs. Great work all!

This award with co-PI Junfang Wu from the University of Maryland School of Medicine enables study of exosome-based approaches to treatment of spinal cord injury.

This award as a collaborator with Dr. John Harmon of Johns Hopkins University and Canton Biotechnologies facilitates the study of DNA delivery for wound repair.

This award, 1 of only 6 awarded nationally, will support John's work on HER3 inhibitors for cancer therapy. Congrats! UMD News Article

Congrats to Anjana, who successfully passed her PhD proposal examination and is now officially a PhD candidate!

Congrats to Divya, who successfully passed her PhD proposal examination and is now officially a PhD candidate!

This award will enable Jinan to continue her protein therapeutics work in the lab. Congrats Jinan!

Congrats to Sri, who successfully defended her BIOE Honors thesis! She becomes the first BIOE Honors awardee from the lab.
Sri will be pursuing a PhD in Biomedical Engineering at Case Western University!

This award will support Sonya's work in the lab this summer!

This award will support John's attendance at PEGS Boston, one of the premier protein engineering conferences in the world.

Welcome to the newest PhD student in the group, Eli Pottash.

December 2016 - Lab receives funding from the Elsa U. Pardee Foundation

This award supports our work on HER3-targeted therapy in collaboration with Stan Lipkowitz at the NCI.

This award, made through the University of Maryland Marlene and Stewart Greenebaum Cancer Center, supports our research on HER3-targeted therapies along with our collaborators Dr. Arif Hussain and Dr. Rena Lapidus.

Thanks to the hard work of everyone in the group, Dr. Jay was recognized with this honor alongside 10 talented colleagues. More info here: CAMB Young Innovators Issue

Tek's paper "Oncogene Knockdown via Active Loading of Small RNAs into Extracellular Vesicles by Sonication" was published in Cellular and Molecular Bioengineering​ as part of the 2016 Young Innovators special issue.

Divya was awarded a 2 year fellowship from the American Heart Association to study the effects of cellular mechanical microenvironment on EV biogenesis and vascularization bioactivity! UMD News Article

John was also recently recognized with an honorable mention for the AAPS Graduate Student Fellowship, which includes a travelship to the AAPS National Meeting in Denver.

Several lab members attended and presented at the 10th Annual Fischell Festival celebrating the 10 year anniversary of the founding of our department. Thanks to the Fischell family for the continued support of our department

Natalie will continue her work on EVs with this award.

This award will support Sri's work in the lab this summer.

Tek's paper reports on crucial parameters that dictate the efficacy of extracellular vesicles for gene therapy.

This funding, made through the UMD-NCI Partnership for Integrative Cancer Research, will support John's work on designing novel HER3 inhibitors for cancer therapy along with collaborator Dr. Stanley Lipkowitz

Divya received a travel scholarship sponsored by the NSF to the ISEV 2015 Congress in April in Bethesda, MD to present her work involving extracellular vesicles for therapeutic vascularization.

Divya Patel and Anjana Jeyaram have joined the group as PhD students.

Two undergraduates in the lab have been awarded research fellowships. Alex George will enter the NIH Baccalaureate Program starting Summer 2015 prior to applying for graduate school. Lampouguin Douti received a summer research fellowship in nanomaterials at NIST. Both of these were highly competitive and great achievements.

Douti received a travel scholarship sponsored by NIH to the ISEV 2015 Congress in April in Bethesda, MD to present his work involving extracellular vesicle mechanobiology.

Tek and Douti each received travel awards to the TERMIS-AM conference in December in Washington DC to present their work involving extracellular vesicles.

Tek's review article, "Emerging roles for extracellular vesicles in tissue engineering and regenerative medicine", was published in Tissue Engineering Part B with contributions from everyone in the lab.

John Schardt becomes the first Ph.D. student in the lab! John recently passed the Research Aptitude Exam with flying colors and has already been awarded a departmental prize for his fellowship application.

A new article reporting the use of drug delivery technology to investigate metabolic homeostasis was published in the journal Endocrinology. This work was done in collaboration with corresponding author Dr. Chuhan Chung of Yale University.

The group was awarded a Tier 1 seed grant from the University of Maryland to pursue studies of extracellular vesicles as drug delivery carriers. Thanks to UMD for the support.

Dr. Tek Lamichhane has joined the lab as a research scientist. Tek will head up extracellular vesicle and molecular biology work in the lab and we look forward to his exciting contributions.

A new review article, "Protein engineering for cardiovascular therapeutics: untapped potential for cardiac repair", was published in the journal Circulation Research. This work was done with Dr. Richard T. Lee at Brigham and Women's Hospital.

This award from the Biomedical Engineering Society (BMES) provides funds for travel and registration at the BMES Annual Fall Meeting in Seattle, WA. Thanks to BMES for the support.

A new paper detailing the design of a novel protein that has potential as a therapeutic for cancer patients was recently published online in the journal Circulation. The article was also featured in an editorial in the same issue of the journal.

The Jay Lab at UMD has officially opened and the lab has been awarded a Pathway to Independence R00 grant from the National Institutes of Health. This award will fund new research in protein engineering and drug delivery for improved wound healing in diabetes. Thanks to NIH for the continued support.